To look at it, Christmas in Japan looks pretty Western. There are Christmas trees, lights, and even pictures of Santa adorning windows. There are some differences, of course. Christmas cake is ubiquitous and you may be a bit disturbed to discover that what you thought was a statue of Santa was actually Colonel Sanders decked out in a red Santa outfit. It seems that many Japanese think a proper Christmas dinner centers around a bucket of KFC. But, such are the quirks of a holiday spread across the globe. Cultures will interpret the joy of celebrating Christ's coming in their own ways, right? 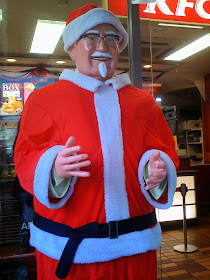 Except the Japanese don't. Japan is a country that is only about 1% Christian, according to the Pew Forum1. Christmas isn't an officially recognized holiday at all; children still attend school and businesses are open (especially KFC!) Yet, the trappings of a Western tradition are there. So, why do the Japanese get into the decorations and the trees at all? It seems those Christmas cakes provide some good insight into the motivations for the Japanese celebration.

Pre-World War II Japan didn't have a lot of exposure to Christians. The Roman Catholic Church had sent missionaries to the island in 1549where they "soon established churches, hospitals, orphanages and educational institutions, which became venues whereby the two cultures could encounter one another."2 Yet, crushing martyrdoms and extended persecutions left Japan with only a sliver of Christian believers who were forced underground for centuries.3 The nation was still feudal and agrarian, with only the elites having the wealth for indulgence. Cultural scholar Hideyo Konagaya states that "Modernity and affluence in Christmas were still not a realistic notion when rural lives and feudalistic social systems still predominated."4

After World War II, things were worse. According to an NPR article, the economy was a disaster. People there did whatever they could to make ends meet, but luxuries such as sugar or chocolate were in short supply. However, US soldiers often had candy bars they distributed to children.5 Konagaya writes, "Sweet chocolates, above all, given by American soldiers epitomized the utmost wealth Japanese children saw in American lives. They brought the message that affluence and happiness took American forms (Fujiwara)."6 Cake had also been previously linked to western affluence and it was "available exclusively to the upper aristocratic class or urban elite."7

However, as Japan's economy recovered and then boomed in the 1980's, "Christmas celebrations gave the Japanese the most tangible pictures that could convey images of prosperous modern lives in America" and the cake was the epitome of that symbol of success."8 Today, young urban Japanese see Christmas Eve not as a day to celebrate at home with family, but as an upscale night on the town where tangible gifts to your beloved are expected.


Sometimes a Mirror is Uncomfortable to See

While the Japanese interpretation of Christmas may seem remote, I think Konagaya was right when noting that the Japanese were simply trying to mimic American values and traditions. They saw the commercialism, the emphasis on stuff, the weight we placed on the trappings of the day and presented all of that without any of the spiritual root that should be the focus of Christmas. Was something lost in the translation? Perhaps. Yet, an imperfect mirror will distort an image but it can highlight flaws you hadn't noticed before.

We need to make sure in our Christmas celebrations that Jesus is the central focus for the day. The Japan Times noted this conversation where a Japanese woman enquired about the origin of Christmas from an American man:


Young Japanese woman: Is Christmas celebrated to mark the birth of Jesus or his death?
American man: Do people usually go shopping before a funeral?

At least she knows it has something to do with Jesus!

When my kids were young, we used cake to celebrate Christmas as well. It wasn't a Japanese Christmas cake; it was a birthday cake. We had a plastic Nativity set that the kids could play with. We would set the Wise Men figures at the back of the house and the kids would move them each day until their journey was complete on Christmas Eve. We would also hide the baby Jesus figure until Christmas morning. Later that day, we'd decorate the cake with birthday candles and everything. It isn't much, but these traditions put the emphasis back on the coming of Jesus instead of the coming of presents.

I pray that you and your family will emphasize the amazing gift of the Savior, of God with Us, this Christmas. Make sure that your outward celebrations show that aspect of the holiday. After all, you never know who's watching.