What If You Can't Be Reasonable Without Faith?

Sam Harris, one of the new atheists, in his book The End Of Faith defines faith this way:


The truth is that religious faith is simply unjustified belief in matters of ultimate concern—specifically in propositions that promise some mechanism by which human life can be spared the ravages of time and death. Faith is what credulity becomes when it finally achieves escape velocity from the constraints of terrestrial discourse—constraints that you're leaving like reasonableness, internal coherence, civility, and candor. 1

Of courses, Harris is completely wrong in his view of faith. Some aspects, such as his attempt to divorce faith from civility are a bit laughable—especially when it is the "reasonableness" of Harris that tries to label any person of faith as lost in outer space. 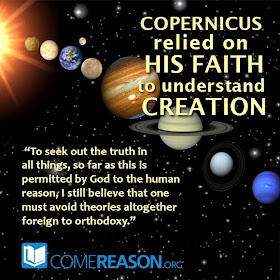 Sam Harris is a master at creating straw men when discussing religious belief, and that's just what this is. But the misconception has been around a lot longer than Harris. It was probably expressed most succinctly by Mark Twain who said, "Faith is believing in what you know it ain't so." But people of reason can be also people of faith, in fact the Christian practice of apologetics is designed to give reasons and evidence for faith. Part of the confusion is polemical; atheists like Harris have a desire to make people of faith look as bad as possible, so he writes that the faithful are uncivil and deceitful. But Harris isn't being reasonable here. I've written before about  Harris's misdefinition of faith; you may read articles here and here. I think another key problem with Harris; view is that he misunderstands the concept of reason as well.

Everyone assumes they know what reason is, but reason involves thinking rightly about the world around us. Ultimately when we talk about reason we talk about a rational enterprise (using our minds) to aim at an objective criterion. We avail ourselves of what we know to try and make sense of ourselves, the world and our experiences. Basically, being reasonable means we are looking for truth by thinking well.

Since reason involves looking for truth, it then becomes important to realize that reason includes going beyond ourselves. Truth is an objective thing; it's something "out there" not just something subjective. Any truth claim lies outside of the individual. Truth may stand in contrast to the experience that an individual has, including even empirical/sensory experience

For example, your senses may tell you that the Sun circles the Earth. If we look up, we watch it; we can see it with our eyes. Isn't that enough proof? No, it isn't. Isn't that empirical evidence? Yes, but just a bit of empirical evidence alone may lead you astray. Just because we see something with our eyes it is not necessarily the end of the matter. How do we know that our eyes are not telling us the truth? We have to find new facts and we then use our reason to compare different sets of data.

When Copernicus offered his model of the solar system where the earth circles the sun, part of the driving nature to his belief is that the Creator of the world would prefer simpler and more beautifully designed way to arrange the planets' motion:

For Copernicus as for many ancient philosophers the sky is the visible God; therefore the study of the movement of the celestial bodies is the most excellent way to the invisible God. The Creator is the great architect of all things; in the cognition of the mathematically simple structure of the universe man will become united with Him. It is suggested that these theological ideas gave Copernicus the pertinacy to work out his heliocentric system despite the misgivings of contemporary Aristotelian physicists.2

Copernicus, then, sought to explain the universe that was as satisfying to his faith as it was to his eye. He dedicated the book containing his findings to Pope Paul III and said:


I am not so much in love with my conclusions as not to weigh what others will think about them, and although I know that the meditations of a philosopher are far removed from the judgment of the laity, because his endeavor is to seek out the truth in all things, so far as this is permitted by God to the human reason, I still believe that one must avoid theories altogether foreign to orthodoxy.3

There was no way to deduce Copernicus' view using sense data alone. Copernicus showed mathematically why his model made more sense, and part of the attractiveness of his model was its simplicity and beauty. But Copernicus says that he wished to remain orthodox in his understanding of the world and it was his use of reason as given by God that led him to his view of a sun-centered solar system. Metaphysical faith helped propel the Copernican model forward.

When one seeks to be reasonable, it means that he must weigh all the information at his disposal. That may include considering ideas that are not based in empirical observation alone, but ones that have a basis outside of nature. If God's existence makes more sense out of things like the emergence of life from nonlife, the emergence of consciousness and the orderly nature of the universe, then, barring actual evidence to the contrary, it would be unreasonable for us to believe there is no God.

I wish Sam Harris and other atheists who like to bring up Copernicus would look at how reasonable Copernicus really was. I also wish that some of the New Atheists would also hold to not being "so much in love with my conclusions as not to weigh what other think of them." That would be a very reasonable thing to do.