Trade Your Thanks for Desire - Doors Open at 6PM

Tomorrow is Thanksgiving and it's one of the busiest holidays of the year. Traffic swells on roads and at airports as people travel to celebrate a day of thanks, prayer, and togetherness with friends and family. 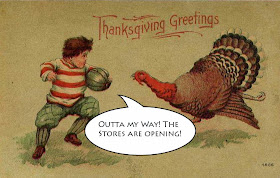 At least that's the Norman Rockwell version of it. It seems every year that merchants are pushing more and more to be invited to dinner as well. Yesterday I received an e-mail from Staples trumpeting the fact that they will be open Thanksgiving Day from 6:00 PM to 10:00 PM. Staples. An office supply store! So I'm supposed to leave my family and my home on a day set aside to give thanks just to go out and grab that new fax machine I've been eyeing? Is it really so important to grab a printer or tablet that you cut short some of the few precious moments you have to be with loved ones all in the same place?

While Staples is an easy target, Target is just as guilty. But I don't place the blame primarily on the retailers. The secular world wants to make money, and they know that holiday shoppers can be attracted with "early-bird sales" and "doorbusters". In an article for Colloquy, Lisa Biank Fasig reports:

"What we learned is we didn't open early enough," Sluzewski said. "We had very large crowds just about everyplace, and what many of them told us is that (they) wished we had opened earlier."1

The article goes on to say that many of the Thanksgiving Day shoppers are young, falling into the 13 to 30 year old demographic. Do the young people of today value their stuff more than their relationships?


How is "Give it to me at a discount" Thankful?

The problem isn't simply the devaluing of Thanksgiving as a family holiday, but the fact that running out to the store to grab that "much needed" television or laptop at deep discounts is directly contradictory to the concept of the holiday itself. The day was to be reserved for giving thanks to God for his provision and blessing in our lives, not to say "what I have is OK, but I won't really be happy until I pick up that thing in the ad."

Lest I come on too strong, I do want to say that I understand money is tight and people will want to be able to save where they can. I get that. However, I also think that we need a rest—a Sabbath if you will—from those concerns every once in a while. My oldest son is married and has a daughter. To be able to gather with them for an evening is worth far more than the $100 I could save buying a TV on Thanksgiving night. Those times are too precious to waste on stuff.

There is also a concept of trust I think gets lost in all this. God commanded Israel that they should not only have a day set apart from work once each week, but he also commanded one year where they should not actively farm their fields. That took an enormous amount of faith on their part in trusting God to provide. There are so few days offered to us in modern society where we even have the opportunity to rest and reflect on the blessings in our lives; I'd hate to lose Thanksgiving to the merchants.

In our rush to push Black Friday into Black Thursday, I see an analogy. I want to be careful in saying I'm not calling everyone who shops on Thanksgiving Day a sinner; I'm merely using the phenomenon as a parallel to a more important point. Thanksgiving Day sales are driven because stores want to exploit any opportunity they can to make money. They know that if they offer enticements, people will come and not only buy the drastically marked-down items, but they will pick up accessories and other things where profits can be made. Therefore, as the competition gets more fierce, they continue to push their opening earlier and earlier, tempting shoppers to visit their store first.

On the other side, consumers justify their actions by saying they needed that item or they needed to save those extra dollars to make their budgets work. As they are faced with earlier openings, they feel like they might miss out, becoming more immune to the problem while reinforcing the store's actions. This is exactly how sin works in a person's life. Self-justification and small concessions lead to more dependence on the sin itself (whatever that may be), until the sin stands in direct contradiction to those values one says he has. No addict has ever purposely sought out his addiction, yet the consequences of his concessions lead to serious problems.

I don't know if the Thanksgiving Day opening trend will continue. Many fewer shoppers are expected this year as compared to last.  But, I don't doubt that we send the wrong message to our families and to the retailers when we don't take a Sabbath from commercialism and appreciate the most valuable of all resources: time giving thanks with our families.