The Need For God in Government

A lot of attention has been given to the expression of religious belief in government institutions. We see people more and more claim that religion should not be part of the political process. Religion, they would argue, is personal while politics can affect us all. But politics uses legislation as its tool, and any legislation has a moral makeup. Politicians seek to pass laws "for the good of the people." But how can we understand what "the good" is? Are we justified in holding to any laws at all if we exclude God as the basis of their authority? 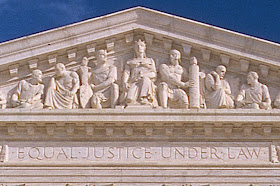 Now, this may seem like a strange question. "Of course we should have laws," you may think. "Without laws, how would society function?" That's fair. However, my query is based not on the pragmatic effects of laws, but on their authoritative nature. What right do legislatures have in making rules for me to live by? Why should I be obligated to follow rules created many times by people with whom I disagree? If you're a human being and I'm a human being, then what makes your rules better than mine?

Much of what we base western society on today is derived from the concept of natural law. Natural law says that the ideas of good and evil, justice and injustice are divine in origin. When God designed man, He created us in a way so that we can identify these concepts. St. Thomas Aquinas called the ability to discern good and evil "nothing else than an imprint on us of the divine light." 1

The English philosopher John Locke took the concept of natural law even further. Locke said that not only did God design us to recognize concepts of good and evil, but He also created us to be "free, equal, and independent." 2 However, Locke understood that man is also naturally a communal creature. Complete independence was impossible, partly because of the need for other people and partly because of man's sinful nature. Man was selfish and would seek his own benefit above that of his neighbor's. He writes "The state of nature has a law of nature to govern it... that, being all equal and independent, no one ought to harm another in his life, health, liberty, or possessions."3 Locke goes on to explain that because we are God's creation and we serve His purposes every individual must try to "as much as he can, preserve the rest of mankind, and may not, unless it be to do justice on an offender, take away, or impair the life, or what tends to the preservation of the life, the liberty, health, limb, or goods of another."4


2. The Need for Government

It is the need to do justice that creates the need for government. Philosopher John Locke wrote extensively on this concept. Locke felt that because man seeks selfish interests, a governing institution must exist to judge between individuals and to protect the liberties of all its citizenry. "The law of nature would, as all other laws that concern men in this world be in vain, if there were no body that in the state of nature had a power to execute that law, and thereby preserve the innocent and restrain offenders." 5

In forming  governmental structures, Locke said that individuals would willingly give up certain freedoms in order to gain the safety and advantage of living in a community. He termed this exchange a "social contract". We give up a small amount of freedom (such as driving as fast as I like) and instead obey the laws of our community, but in return we become safer on the road since we know other drivers are to also obey those laws. In the end, everyone benefits.

By continuing to live in the community, we continue to agree to that exchange- it is what Locke calls "tacit consent". We participate in and enjoy the benefits of the community's laws, so we therefore support the contract. But all this is predicated on the idea that the state should seek to preserve the rights of the individual as much as possible. When a political system fails to do so, the individuals have the right to dismiss that system as corrupt. 6

Notice that in Locke's view, the government becomes necessary to enforce laws out of a obligation to justice, a justice that is based on the concepts of right and wrong established by an omnipotent God who created all men as equal. If God is removed from the equation, then where does the authority and mandate for the existence of government come from?

Some have suggested that government is there to enforce the will of the majority, but this cannot be the entire basis of government. If it were, then where do the rights of the minority come from? Do we really believe that slavery was right because it was legal or that the majority held it to be correct? Was the extermination of Jews appropriate in WWII Germany because it was legal? Thinking the majority makes something right is a fallacy. Martin Luther King, Jr. said as much when he was questioned by church leaders as to whether his civil disobedience was the Christian thing to do. He wrote:


One may ask: "How can you advocate breaking some laws and obeying others?" The answer lies in the fact that there are two types of laws: just and unjust. I would be the first to advocate obeying just laws. One has not only a legal but a moral responsibility to obey just laws. Conversely, one has a moral responsibility to disobey unjust laws. I would agree with St. Augustine that "an unjust law is no law at all".

We hear so much about the separation of church and state today that I'm afraid we have forgotten the need for God as the basis to justify government's existence and our personal liberties. To be sure, this doesn't mean that we should mandate a specific religion for the citizenry, for that would be intruding on individual liberties. But it does mean that we cannot separate God from government or from liberty and equality. To do so would be to lose all justification for both.

1.  Aquinas, Thomas, Summa Theologica as quoted in Questions That Matter Ed. L. Miller
McGraw Hill Companies, New York 1996 p.503
2.  Locke, John Second Treatise of Government, VIII, 95
http://www.constitution.org/jl/2ndtr08.txt
3.  Ibid. II, 6, 8
http://www.constitution.org/jl/2ndtr02.txt
4.  Ibid. II, 6
5.  Ibid. II, 7
6. The Founding Fathers of the United States appealed to this principle when they sought to gain independence from George III. Locke's influence on the Declaration of Independence is evident in its opening lines: "When in the course of human events, it becomes necessary for one people to dissolve the political bands which have connected them with another, and to assume among the Powers of the earth, the separate and equal station to which the Laws of Nature and Nature's God entitle them, a decent respect to the opinions of mankind requires that they should declare the causes which impel them to separation. We hold these truths to be self-evident, that all men are created equal, that they are endowed by their creator with certain unalienable Rights, that among these are Life, Liberty, and the pursuit of Happiness." As you can see, it is by appealing to God from which the ideas of freedom and equality stem.
7. King Jr., Martin Luther "Letter From the Birmingham Jail"
http://almaz.com/nobel/peace/MLK-jail.html