How did Reza Aslan Discover the Zealot Jesus?

Stop the presses.  Jesus is just a man.  That seems to be the reaction of the media to Reza Aslan's new book, Zealot: The Life and Times of Jesus of Nazareth. Aslan has been making the media circuit, getting coverage on popular television news programs such as Fox News and Piers Morgan Live, along with featured articles in The New York Times, The Los Angeles Times, the Boston Globe, and many others . Aslan is currently on tour, and you can even check his web site to find out when he's coming to your city. 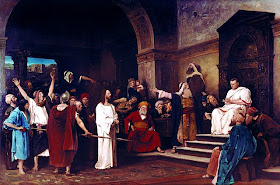 Who would have thought that a book on the life of Jesus would garner so much attention?  Actually, it could have been expected, though the clumsy interview Lauren Green gave on Fox News definitely lifted Aslan's profile to the other outlets. (What's that saying, again? The enemy of my enemy is my friend?) But we have seen this kind of attention given to authors who wrote similar books previously. The Jesus Seminar has had great coverage throughout the 1980s and 1990s when it was active.  Two of its prominent members, Robert Funk and John Dominic Crossan, would be regularly seen in documentary specials and feature stories.  Debunking the Christian story is a draw, and the media knows it.

It seems that when any new theory about Jesus as someone other than whom the Gospels portray Him to be pops up, there is a new batch of faith-debunkers ready to jump on the bandwagon.  Of course, depending on your preference, each of these faith-debunkers have their own take on the matter. As Charlotte Allen wrote in her review:


"To be sure, all of the historical-Jesus people put their own idiosyncratic spins onto the basic narrative. Jesus is variously presented as a love-your-neighbor moralist (the Enlightenment view); a cynic philosopher (Crossan); a balding, overweight rabbi (Chilton); or a secular sage who hated organized religion (the Jesus Seminar's late founder, Robert Funk). Aslan's take is that Jesus was a fanatic Jewish ideologue and would-be messiah whose 'Kingdom of God' was a 'call to revolution' against the occupying Romans, and who envisioned 'blood-soaked streets' once the revolution got underway."

Isn't it interesting that those who claim to have the inside scoop of the real view of Jesus—the one that only dispassionate scholarship produces—all come out with different stories? It should give you pause when you hear claims that this new book or that one will disprove our Sunday school stories about Jesus. Why, if the scholarship is so convincing, do these scholars have such different conclusions on who Jesus really is?  They all use the same source material; the Gospel accounts, Paul's writings and some other historical texts are what both liberal and conservative scholars rely upon to build their understanding of Jesus' life and deeds. There are no new revelatory discoveries in the source material, so what's going on?

New Testament Scholar Craig A. Evans explains that "Aslan has canvassed much of the responsible scholarship in the field, but he does not always choose his options prudently. He often opts for extreme views and sometimes makes breathtaking assertions." Yes, it has been the practice by the historical Jesus crowd for a while not to take the whole of the source documents as reliable, but to cherry-pick only those facts that paint the picture one wants to portray. As Allen observed, "While Aslan describes the Gospels and other New Testament narratives as 'propagandistic legend' in which 'factual accuracy was irrelevant,' he quotes from them — when it serves his purposes — as often as any fundamentalist preacher." So Aslan dismisses miracles or the Resurrection as myth, but he somehow can discern just which passages are mythical and which are not. We are never told of the method he uses to do so, we are just to trust him to make these judgments for us.

In a court of law, when an attorney wishes to counter the testimony of a witness, they seek to discredit the witness entirely. In other words, the cross-examiner doesn't try to tell the jury "you have heard Mrs. Jones tell us that the robber was wearing a black shirt and blue jeans and he sped away in a red car. I think you should believe Mrs. Jones about the car, but she's making up the shirt and jeans part." That would never fly. Aslan needs to weigh in on the bits he dismisses as fable and answer just how he is able to so shrewdly discern the text. Otherwise we're left with Evan's summation that "at points Aslan's book is informative; it is often entertaining. But it is also rife with questionable assertions. Let the reader beware."
Lenny Esposito at 11:08 AM