CSI has Nothing on Cold-Case Christianity 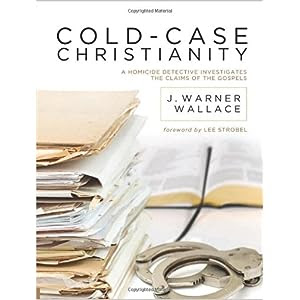 Crime dramas are one of the longest-running genres in television. From Perry Mason to Dragnet to CSI, people have consistently tuned in to see how clever detective work can uncover the truth about the facts in the case, sometimes even showing guilt on a very likable character. Former cold-case detective J. Warner Wallace has taken all the drama of these whodunits and created a new apologetics book entitled Cold-Case Christianity: A Homicide Detective Investigates the Claims of the Gospels

that is just as engaging as any television show, perhaps more so given that his investigation focuses on the question "Did Jesus really rise from the dead?" The fact that this is a real historical question with the most profound implications makes this book more interesting than any fictionalized television show.

Cold-Case Christianity is at once accessible; each chapter begins with an anecdote drawn from Wallace's 23 year law enforcement career, and then uses that example to show how one discerns the truth from the facts at hand. The chapters are short and only deal with one topic at a time, which is perfect for a 21st century audience more accustomed to Twitter than treaties. Each point is reinforced in a sidebar and the illustrations make it that much easier to grasp.

Wallace builds his case by using the first ten chapters explaining how rules of evidence work, then in the last half he turns his attention to the New Testament and applies these rules as strictly as he would to any homicide case. Not only are his results convincing, but the journey is fun, which is not an adjective normally used in describing apologetics books.

Because Wallace also holds a seminary degree and has served as a youth pastor, his application of the material hits all the right notes: there are no theological gaffaws. His apologetic approach is sound and he has familiarized himself with the leaders in the field to know how to put forth the most current and convincing arguments.

Cold-Case Christianity is simply a joy to read and it would be one of the first titles I would recommend to individuals or small groups who haven't had a lot of exposure to the arguments in defense of the Christian faith. I'd also suggest that seasoned defenders read the book so they can learn how to better communicate the truths of the Gospel in a compelling way. As the culture continues to make the false dichotomy of faith versus reason, this book stands to show how one can use reason and evidence to support one's faith.

The detective has found the evidence to show that each of us can be freed from the guilt of our sin. Why wouldn't you grab it?
Lenny Esposito at 10:33 AM