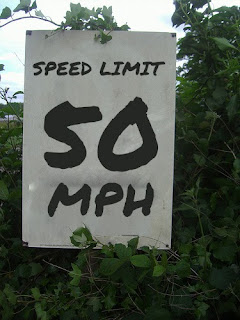 One of my favorite John Mayer songs is his breakout hit "No Such Thing." However, its lyrics are indicative of an increasingly acute problem in our culture: the elevation of self above any authority structure. Mayer sings "They love to tell you stay inside the lines, but something's better on the other side." Is that true?

If you think about it, everyone looks to find a source of authority for the actions and decisions of his or her life. Authority is the natural starting point when seeking to understand how anything works. When we drive, we should obey the traffic signs because they are placed by an authority that has the power to control traffic for the public's safety. The authority has the knowledge to know how fast you can corner a turn before your tires lose their grip. An authority can also offer us safety: if one ignores the authority of a stop sign, the intersection may not hold something better of the other side, but disaster!

So, one can say appropriate authorities offer each of us at least two important elements in life: instruction and safety. I use the word "appropriate" because while there may be a lot of claims to authority, there should be some basic things that qualify a source as an appropriate authority. An authority should have some degree of expertise in whatever sphere he claims to have authority over. If we are also talking about authority as a governing institution, then the authority should be vested with the power to do things such as make laws or post traffic signs.

Don Thorsen writes, "Authority pertains to the right and power to command and be obeyed."[1] This is a good definition. If I went outside my house and posted my hand-painted speed limit sign, people would most likely ignore it because I have neither the right nor the power to override the city laws.

This idea of authority becomes even more important when we look at moral laws. In matters such as life and how one should live, the ultimate authority resides in God. God has the right to command us by virtue of His being the Creator of the universe generally and the creator of mankind specifically. In Romans 1:18-22, Paul argues that through His creation God has given us a witness to Himself as creator and because of that all men are obligated to worship and obey Him. Paul also pointed to God as creator of all mankind when he addressed the Athenians (Acts 17:24) and said that they should "seek God and perhaps feel their way toward him and find him. Yet he is actually not far from each one of us."

If God is the Creator, then he would have the definitive knowledge of how the world works and He would have the proper right to set down guidelines for how his creation should behave. God would have the right of authority. Of course, if God is the creator, he also demonstrates his power to control his creation. As the author of life (Gen. 2:7, Ecc. 12:7), God has the power to give life and take it, and can do so with impunity.

Many times when I talk about things of God with people, they will say things like "I cannot believe in a God who would do thus and so." But such statements are akin to posting your own speed limit sign on your street. Just because you want to drive faster doesn't mean that you should ignore the sign or that it isn't there for reasons to make everyone safer. There is a real world out there, and dismissing it can lead to painful consequences.