An article entitled "Face it: Monogamy is unnatural" was featured yesterday on the CNN site. Written by Meghan Laslocky, her thesis is that "a greater tolerance toward the human impulse to experience sexual variety is needed."[1] Laslocky bases this on the fact that "Biologically, we humans are animals. So it makes sense to look to the animal kingdom for clues as to what we are built for." She then throws out examples from the animal kingdom of how monogamy is a sham. "The evidence shows that monogamy is a rarity among mammals. Only 3% to 5% of all the mammal species on Earth 'practice any form of monogamy.' In fact, no mammal species has been proven to be truly monogamous." 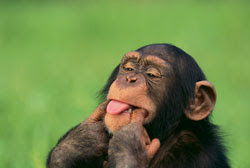 She culminates her argument with a look at the biology of pair-bonding in prairie voles, a small rodent native to North America. Stating that hormones and receptors are the cause for such behavior, Laslocky concludes:


"Among humans, here's the rub: we have the chemicals and the receptors, but it varies from person to person how much we have. Based on brain wiring alone, inclination toward fidelity can vary dramatically from one individual to another. In other words, 'once a cheater, always a cheater,' might have as much to do with brain wiring as with a person's moral compass, upbringing or culture. "

I'm sure everyone who has walked in on their spouse in the act of infidelity is comforted by that fact.

Arguments like the one Laslocky proposes are not new. Many times I hear from homosexual advocates that homosexuality must be natural because zoologists have observed animals performing homosexual behavior in the wild. This type of reasoning is as preposterous as it is inconsistent. No one would say, "Chimps fling their feces and we are so close genetically we should, too." Or to take a more mundane example, it isn't uncommon for a host to be horrified when his or her pet dog mounts the leg of a guest. Even in the article, one image of elephant seals is accompanied with the note that males "protect harems of more than 100 females from other males thinking of moving into their territories." I'm sure such a "natural" relationship model will be not considered acceptable by women!

No, these appeals to the animal kingdom as a way to understand our sexual actions make one of two egregious errors. The first is they assume humans are slaves to our biology. While prairie voles may not be able to rise above their responses to chemical hormones, part of what it means to be human is to NOT react to our base stimuli. We don't want a man threatening to kill at the mere presence of another male. We don't want a person to simply take whomever he or she desires. We have this capacity for reason that makes us--let's choose this word wisely--civilized.

In fact, that's the argument that women's groups have relied on when talking about rape and provocative dress. It doesn't matter how it makes you feel, you don't have to act on it. So, to dismiss infidelity as people who are victims of biology opens up a much larger issue and gives sexual predators an out.

The second way these kinds of arguments err is by blurring actions and assuming animal motivations are the same as in humans. This anthropomorphizing animal behavior is a common plague in animal behavioral research. The case of Koko is a perfect example.

Koko is a famous gorilla who supposedly mastered over 1,000 signs and uses American Sign Language to communicate in complex sentences. However, as Steven Pinker in his book The Language Instinct documents, the handlers were interpreting actions as signs, interpreting one sign to mean something else, and basically superimposing what they wanted Koko's behavior to mean onto the ape's actions. [2] Similarly, no animals form homosexual relationships for pair-bonding. They auto-stimulate themselves with whatever they may find. That's why the dog mounts the guest's leg.

One thing not mentioned by proponents who liken human sexuality with animal behavior is acts of sexual gratification between species. Peter Singer writes that while visiting an orangutan refuge in Africa with a group, one of the women "was suddenly seized by a large male orangutan, his intentions made obvious by his erect penis. Fighting off so powerful an animal was not an option, but Galdikas (the refuge's director) called to her companion not to be concerned, because the orangutan would not harm her, and adding, as further reassurance, that ‘they have a very small penis.' As it happened, the orangutan lost interest before penetration took place."[3] Such a scenario is scary, but not as scary as Singer's conclusion. He says such an action is an example of why sex across species should "cease to be an offence to our status and dignity as human beings."[4]

Regardless of which error is committed, you can see how judging sexual actions by observing animal sexual behavior leads to dangerous consequences.  Human beings are not merely animals. We have minds and we have a moral compass. Bestiality is wrong. Rape is wrong. And excusing infidelity on the basis of biology is itself inexcusable.