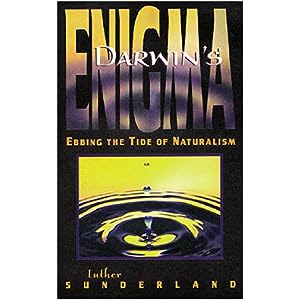 Evolution is always a hot topic in apologetics circles and I've seen a true renaissance in the way Christians have approached the myriad of issues surrounding the claim that the entire diversity of life on this plant derives from a single organism plus chance mutations honed by natural selection. Such stalwarts as Phillip Johnson, Stephen Meyer, William Dembski, and Michael Behe are familiar to most who deal in this subject matter.

However, in 1984 the phrase intelligent design had yet to be coined and Phillip Johnson was a full nine years away from publishing his landmark Darwin on Trial. But it was this year that Darwin's Enigma by Luther Sunderland was first published, a remarkable book in many respects. This still stands as one of my favorite approaches to examining the evidence for the neo-Darwinian model that is offered as the only rational viewpoint by the scientific establishment.

Initially entitled Darwin's Enigma: Fossils and Other Problems, Sunderland takes a careful look at the story of evolutionary development offered as fact in school textbooks and compares it to the evidence that paleontology has actually uncovered.'The main reason I like the book so much was that Sunderland's approach was to find some of the primary people working with the evidence of the fossil record and get them to comment specifically as to what the evidence shows. He writes:


In December of 1978 the New York State Board of Regents directed the New York State Education Department to do a detailed study of how theories on origins should be treated in a revised version of the state's Regents Biology Syllabus. As part of their study they invited the author to supply pertinent scientific information to the Bureau of Science Education which was conducting the study.

During the next year the author conducted taped interviews with officials in five natural history museums containing some of the largest fossil collections in the world. The interviews were with Dr. Colin Patterson in London; Dr. Niles Eldredge in New York City; Dr. David M. Raup in Chicago; Dr. David Pilbeam in Boston; and Dr. Donald Fisher, state paleontologist at the New York State Natural History Museum. Written transcripts of the interviews were given to the New York State Education Department for use in their study on origins.

In these interviews, the paleontologists were questioned in detail about the nature of the fossil record from the deepest deposits containing fossils to the most recent. Typed transcripts of the five interviews were then sent to the interviewees for editing. All but Dr. Patterson made editorial corrections before they were published for use by educators in various states.

This book presents the substance of these interviews through the use of short excerpts and summaries of the replies to the questions.[1]

Because this was well before the rise of the intelligent design movement, and because it had the auspices of the New York state educators, those interviewed seemed to be very candid in their replies. I would doubt that now, given the political heat the subject has taken on, any respondent would answer as freely as the paleontologists did here. It was truly a once-in-a-lifetime opportunity.

So, what kind of information did the experts provide? One famous quote appearing in the book was given by Colin Patterson, noted paleontologist at the British Museum. In a rather excerpt from a letter, Patterson writes, "I fully agree with your comments on the lack of direct illustration of evolutionary transitions in my book. If I knew of any, fossil or living, I would certainly have included them." P atterson later summed up his statement by saying "If you ask,'What is the evidence for continuity?' you would have to say, 'There isn't any in the fossils of animals and man. The connection between them is in the mind.'"[2]

These are the true nuggets of Darwin's Enigma and they truly help people separate the conjecture of the neo-Darwinian model from the evidence that we have.'Certainly, in the thirty five years since the original interviews were conducted more evidence has emerged.'But although we have more fossils, we haven't found much that answers the questioned Sunderland posed any differently. No one has settled the gradualism versus punctuated equilibrium issue.

Darwin's Enigma is a great read and will help you understand some of the assumptions that evolutionists make as they seek to explain the incredible variety of living entities on our planet without invoking a creator. The best part about all of this is that the entire book is available to read online for free. Rendered in html, you can access it here.