Salad-Bar Truth: When the Critic Commits the Crime

The LA Times recently ran an op-ed piece by Barry Goldman taking Americans to task for mixing and matching various belief systems. However, Goldman makes the same basic mistake that is at the root of his rebuke towards the public. 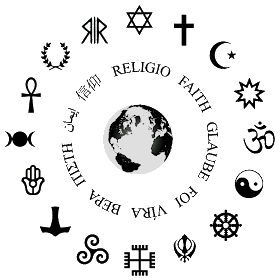 Goldman opens his op-ed piece by quoting from a recent Pew study that states:


Large numbers of Americans engage in multiple religious practices, mixing elements of diverse traditions. Many also blend Christianity with Eastern or New Age beliefs such as reincarnation, astrology and the presence of spiritual energy in physical objects. And sizable minorities of all major U.S. religious groups say they have experienced supernatural phenomena, such as being in touch with the dead or with ghosts.

Goldman then sums up the findings by writing "What is striking about the Pew study is not the prevalence of superstition and hocus-pocus, alarming as that is. It is the feeling that we are free to choose from a broad, cafeteria-style menu of superstitious hocus-pocus. Charles Blow in the New York Times called it the construction of 'Mr. Potato Head-like spiritual identities.'"

It's true that Americans DO take a cafeteria-style approach to beliefs – often holding contradictory beliefs as both being true. This has been a big problem in our culture, primarily because people just don't think through the implications of their belief system. However, Goldman completely crumbles in his analysis. He tries to make a distinction that facts are not things based on preference by referring to the story of elementary class that couldn't tell whether their pet rabbit was a male or female, so they decided to vote about the rabbit's sex. He then opines:


We no longer trust the guys in the seminaries to determine which ideas are inside and outside the community of faith. We feel entitled to make our own decisions. Fair enough; the facts with respect to spiritual matters have always been somewhat elusive. But now many of us feel entitled to decide which scientific ideas to accept. Scientists have their ideas about, say, the age of the Earth or evolution by natural selection, and other people have other ideas. According to this new view, neither has any more claim to legitimacy than the other. There is no fact of the matter."

Goldman concludes his article by saying "We used to be a nation with a broad consensus. If you had a religious question, you asked a religious leader. If you had a scientific question, you asked a scientist. Today, if you have a question (about your enthusiasm for a belief) you ask another enthusiast." Here's where Goldman shows that he doesn't know what he's talking about. He seems to think that expert consensus is the determining factor whether or not we should believe something. That position is ridiculous. If an individual holding to a belief doesn't make the thing true or not, then an expert consensus doesn't make it true either.

There have been many times where "asking a scientist" has given a wrong answer just as asking a religious leader did. Two examples I can think of right away are the science of genetics – where Gregor Mendel's findings didn't achieve widespread acceptance for some 40 years, since Mendel's theory collided with the Darwinian view of blending inheritable traits from parents – and the age of the universe, where the desire for an infinitely old universe was so strong, it caused Einstein to add a fudge factor to his equations.

Goldman really stumbles here. What he should have said was that we hold to certain ideas because we believe them to be true. We have knowledge because we have justification for a certain belief. If a belief that we hold is contradictory – either internally (such as a Christian believing in reincarnation) or externally (such as calling a male rabbit a female), then that cannot be true – we must rethink our position. Experts can help, but that presupposes that they have also critically examined their field of study. However, it may very well be that the experts are wrong. It's quite possible the public could see this and choose to reject the belief.

Rational examination and holding to a belief because its true are the golden standard. Goldman may dismiss matters of faith as "the facts with respect to spiritual matters have always been somewhat elusive." This shows that Goldman has never investigated faith matters seriously. If there is a God, then dismissing the hard work of finding Him out is like the class who would rather choose the rabbit's sex than work to find the answer. Goldman is committing the same crime he's accused us of – choosing which beliefs fit his worldview and then running with them while he sanctimoniously rebukes everyone else.

Image courtesy "RELIGIONES" by ReligijneSymbole. Licensed under CC BY-SA 3.0 via Wikimedia Commons
Lenny Esposito at 8:25 AM