The Shell Game on Stem Cells 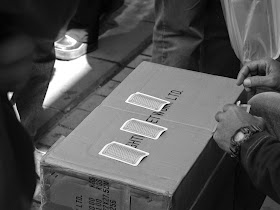 One of the campaign pledges Barak Obama ran on was to reverse the Bush administration's ban of federal funding for new lines of embryonic stem cell research. Given Obama's now in office, some news publications are spinning the stem cell debate pretty strongly. Time magazine's cover story on stem cell research trumpets "How the Coming Revolution in Stem Cells Could Save your Life" while the article is filled with ridiculous statements like "during the dark days of the Bush administration's stem cell restrictions", "federally backed scientists like Melton were forced to adopt a byzantine system of labeling and cataloging their cell cultures and equipment". Even the article's subheading contains more commentary than fact when it states "After eight years of political ostracism, stem-cell scientists like Harvard's Douglas Melton are coming back into the light - and making discoveries that may soon bring lifesaving breakthroughs."

My question is - aren't we getting tired of being lied to yet? The hype in the Time article is ridiculous, meant only to sway people to a political point of view. Let's separate all this rhetoric from what we actually know.
The latest example is how a stem cell treatment can reverse multiple sclerosis symptoms by using the patient's own stem cells. This is a major breakthrough and has no ethical problems whatsoever, yet articles like that in Time never differentiate the success and ethical issues dividing adult stem cells and Let me emphasis this point - there are no successful clinical trials of any treatment using embryonic stems cells anywhere in the world. None . According to the Susan Martinuk of the Calgary Herald, "The U.S. Food and Drug Administration just approved a clinical trial for an ESC treatment for spinal cord injuries, thereby making the U. S. the first in the world to conduct a human ESC clinical trial." She then goes on to offer a very candid assessment of the field:


But many private companies have been reluctant to fund embryo research because it involves morally controversial techniques and, so far, has shown few signs of success. Most preliminary research indicates that adult stem cells are the key to new cures and treatments, so they're jumping on that bandwagon. This is the real reason government funding is so essential to ESC research—few private investors view it as a future success.
...
In contrast, adult stem cells from bone marrow and stem cells obtained from umbilical cord blood are already curing diseases. While scientists are heralding the success of their FDA approval for the world's first clinical trial using ESCs, more than 1,000 clinical trials are underway or have been completed using ASCs. Dozens of cures have been seen in trials and the FDA has already approved ASC treatments for nine different conditions. Other ASC treatments have been approved for use in other countries, but are still in the process of gaining FDA approval.
Duke University is using umbilical cord blood to treat children with brain injuries and cerebral palsy. The Texas Heart Institute is treating patients with heart disease by injecting their own ASCs directly into the heart to stimulate healing and blood flow. Most recently, a woman's bone marrow cells were used to grow the new windpipe she so badly needed.

The first step to enlightenment isn't Barack Obama. It's acknowledging the only thing holding back embryonic stem cell research is that it might not work. In the Los Angeles Times, Susan Estrich claimed that those against destroying embryos for research purposes were playing "selfish politics mandated by those who don't give a damn". Really? Where's the track record here? Who's obfuscating the issues? Why don't private investors see the same rich potential in embryonic stem cells as adult cells? And if it's because they don't want to get caught in an ethical quandary, then why not advance the creation of pluripotent cells from human skin instead of embryos. It seems to me that Estrich and Time are the ones playing politics. If you're really worried about the kids, then follow success, not your agenda.