Building Faith Muscles in Your Kids

Last week, I got to have a nice conversation with my eighteen year old son about some different things that's been on his mind. He told me that he's been mulling over concepts of predestination and free will, and reading up on the subject.  We discussed the Calvinist and Arminian models as well as Molinism. We also talked about the nature and purpose of salvation and touched on creation models. 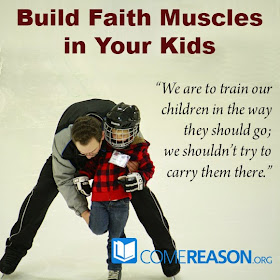 Some of you may think that because I'm an apologist, our family has "theology hour" or some such thing.  That would work about as well in my home full of teenage boys as it would in yours. However, there are a few things you can do to nurture the faith of your children.


1. Realize that It's Their Faith You Want to Develop

I think it's natural that people want the best for their children. In affluent cultures such as ours, that desire sometimes gets mistranslated, though. As parents we can mistake providing a safe, loving home for our kids into providing a care-free area for them to grow up where every difficulty is eliminated or marginalized as much as possible.

Probably the most important principle I can offer is this first one: your desire is not to give your kids your faith, but to have them develop a strong faith of their own. This is key. Teenagers are naturally inclined to seek out meaningful lives. They actually want to understand their world and do things that are important. But our kids don't yet have the experience to know how to go about understanding the world. They're like a young hockey player who has some raw talent, but who doesn't know what it takes to make it in professional athletics.

Your job as parent is to train them. You can't simply tell them what to believe, you have to ask them what they think in a certain situation. You have to let them understand the basics of Christianity then ask them how they would express it. This means drawing their attention to big topics.

One way you can do that is to use movies to point out different worldviews.  For example, my family may go watch the latest superhero action movie. The movie is a lot of fun, but I also try to draw attention to the values the film is promoting. Listen to their ideas of why this hero is so cool and ask why would they want to be like him or her. Ask a lot of questions! The more you explore their point of view, the more they will see where their beliefs may be inadequate. Just as a young athlete must get acquainted with the rules of the game and know the mechanics of moving  on ice skates, so the young Christian must learn to stand upon those things he or she believes. We are to train our children in the way they should go; we shouldn't try to carry them there.

This is again just like developing an athlete. You would never take a person who only played in a neighborhood league and force them to face the professionals. Athletes grow by joining leagues where the level of play is higher than they're used to, but where they can be coached and receive additional instruction on how to improve. As they grow, they're own style and skill come to the fore.

One way I help youth ministries do this is by leading different apologetics missions trips to places like Salt Lake City, Utah or Berkeley, CA. We take kids out of their comfortable environment and train them how to interact with students on a college campus who do not share their Christian beliefs. They get to dialogue with atheists or others and they then can see how those views compare to their own. All the while, we are training the students and talking with them after every encounter.

The problem is if we don't let our kids struggle just a bit with tough questions or with objections to their faith, they will never learn that what they believe is actually able to withstand the pressure. I've talked with many people who in college lost their faith. It wasn't because they thought the objections to Christianity were too difficult to overcome. Instead, they concluded that, since their parents and pastors told them to just ignore those "troublemakers" with tough questions that Christianity didn't really care about the truth at all. Since they had never faced someone antagonistic to their beliefs before, they never knew that Christianity could handle to toughest shots thrown at it.

Our kids can do amazing things. They are truly interested in forming their beliefs, but that formation requires them to have some experience with those beliefs. Help them grow into mature Christians by allowing them to explore their faith and be challenged every once in a while. The conversations that result may surprise you!
Lenny Esposito at 12:07 PM