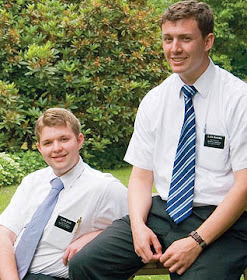 Two subjects one is supposed to avoid in casual conversation are religion and politics. Either of these topics has been known to divide friendships, create animosity, and cause general discord at social gatherings. So, it should be no wonder that the recent endorsement of presidential candidate Mitt Romney by Billy Graham would grab attention. In the evangelical community, the Graham/Romney link made headlines for a different reason. Billy Graham's organization removed some content on their web site where it defines Mormonism as a cult of Christianity. Given that Romney has been very public about his adherence to the teachings of the Mormon Church, does this change mean that Graham's organization is compromising a religious stance for political gain?

Ken Barun, the BGEA's chief of staff who was quoted in the Washington Post, confirmed that the organization removed the article labeling Mormonism a cult. However, he said it was to neuter misperceptions attached to the word that could be used improperly in a charged-up election. "Our primary focus at the Billy Graham Evangelistic Association has always been promoting the Gospel of Jesus Christ. We removed the information from the website because we do not wish to participate in a theological debate about something that has become politicized during this campaign." OK—I can understand that in our "gotcha" media mindset, there are those both online and in the mainstream media that would seek to hoist the BGEA on its own petard, so to speak. I mean this wouldn't be the first time that a Christian organization was misrepresented by the secular press.  But it does leave the question of whether the label of cult should be used for Mormonism unresolved.

This situation brings up a point that I've been thinking much about lately. Whenever I speak with those in the general public, they are usually taken aback if they hear the word "cult" used in connection with the LDS. In fact, I've received a fairly hostile response to the charge and even lost a friend who felt that I was being excessively bigoted and narrow in calling Mormonism a cult. People may or may not have had a Mormon acquaintance, but they are pretty uniform in what they think the word cult means.

Part of the problem here is that language changes.  I was recently listening to a lecture on how the Bible has been translated by Dr. Daniel Wallace and he pointed out how the 1950 Revised Standard Version became outdated within some thirty years due to our shifting meaning in language.  For example, Psalm 50:9 has God declaring to Israel "I will accept no bull from your house." Now, the audience in1950 may understand this as a denial of a sacrifice, but the phrase means something very different to anyone today. Similarly, we never use the word "gay" in conversations with friends to mean happy or carefree, regardless of our position on homosexuality. Because the primary understanding of these words is now different, we must construct new sentences to help us get our idea across with as little misunderstanding as possible.

In our modern day, the word "cult" falls unfortunately under this rubric. Traditionally, we've used the word cult in two ways. It was primarily a theological definition to mark a group or teaching that claimed to hold to Christian beliefs, while diverging from them on essential doctrine.  Rob Bowman's definition of a cult is "A religious group originating as a heretical sect and maintaining fervent commitment to heresy."[1] The BGEA also had defined the word in this sense. The other way the word cult was understood was in a sociological sense, as a kind of fully devoted allegiance that may or may not be reasonable (think of a cult fad, or the cult of personality.) However, in the last thirty to forty years, several theological cults whose followers held an almost slavish devotion to the pronouncements of their leader were given much attention in the media.  Over 900 people committed suicide following Jim Jones in the jungles of South America. In the 1993, David Koresh and the Branch Davidians' stand-off with the federal government was front page news. Add to that the Raelians and the Warren Jeffs' polygamy case and one can see why the word cult now paints a markedly different picture from the theological definition it originally held.

I grant that the word isn't communicating what I desire, but apologists and evangelists still have a problem here, and it is one the Mormon hierarchy themselves have created. In their advertising and in their proselytizing, Mormons continue to claim that they are a Christian faith. Past president Gordon Hinckley even stated "We are Christians in a very real sense"[2]even though Mormon doctrine denies all of the essentials of historic Christianity from the nature of God to the result of the fall to the atonement and even how many divine beings exist! It is therefore vital for the faithful defender of the faith to draw a sharp distinction to these differences lest someone assume that Mormonism is a legitimate choice for those wishing to faithfully follow Christ and His teachings.

So, how do Christian apologists best define the distinctions between those belief systems that seek to claim Jesus as their own while holding to fundamentally different concepts on the essential nature of God, Jesus, salvation, man, and eternity? What word do we use to clearly separate the two? I've used the word cult in the past and while it clearly communicated the distinction to those who understand the differences already, the new connotation may burn more bridges than it builds. Are other labels adequate for the task?  The word "heretical" is outdated. "Pseudo-Christians" or "faux-Christians" feel forced and awkward. Defining Mormonism as a "new religious movement" doesn't capture the concept that Mormons are claiming to be the true church started by Jesus.


The Need for a Word

And that's the rub. As long as the LDS continue to claim that they are Christian and that their roots are grounded in the Bible as well as the book of Mormon, then they force the historic church to make a distinction; we just need a word to communicate the difference. The Greek word πλάνος (planao) captures the idea. We find the word in Matthew 24:24 when Jesus says "For false Christs and false prophets will arrive and will show great signs and wonders, so as to mislead (planao), if possible, even the elect." It means "to confuse' or "to lead astray" and can be used of religious seduction toward idolatry. Maybe we can trade on that concept. I think that if I'm in conversation with friends and I state that Mormonism is a seduction away from Christianity; that would go much further in communicating that there's a difference from Christianity while still showing the claims of Mormonism as being Christian. I think I'll give that a try.  If you have other ideas, let me know them as well.