Top Ten Neglected Books for Apologists - #8 Who Moved the Stone? 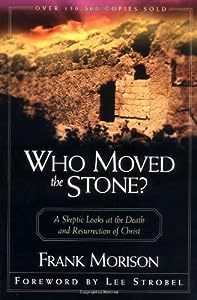 The resurrection of Jesus is the center point of any apologetic for the Christian faith.  Paul makes this clear in 1 Corinthians 15 when he writes "if Christ has not been raised, your faith is worthless; you are still in your sins. Then those also who have fallen asleep in Christ have perished.  If we have hoped in Christ in this life only, we are of all men most to be pitied."  Christianity is not a faith founded on pragmatism, but it is a faith that's based on an historical event, Jesus rising from the dead.

This conclusion has not escaped Christianity's critics.  More than once, those antagonistic to the faith have realized that by knocking out the resurrection, they would with one swift blow topple all of Christian theology. Frank Morison was one such skeptic. In his first chapter, Morison explains that he thought the historical nature of Jesus "rested on very insecure foundations." He then decides to try and debunk the faith by examining the last seven days of Jesus’ life. In this way he could finally highlight the flaws in the fable. But, as Morison attests, his book does not become the undoing of Christianity. Indeed, it becomes the tale of "a man who originally set out to write one kind of book but and found himself compelled by sheer force of circumstance to write another."  Following the evidence, Morison reasons through each of the popular scenarios offered to escape the miracle and ultimately comes to the conclusion that the resurrection must be true.  At the end of his journey , Morison has been left with no choice but to embrace the resurrection as a real event.

While the book has parallels with Simon Greenleaf's landmark The Testimony of the Evangelists, Morison is a reporter and not a judicial scholar, so his writing is a bit more approachable.  Also, since this book was written in the twentieth century, the language and thought are more accessible to the common reader today.

Scholarly books on the resurrection have grown tremendously in the last twenty years, with scholars like N.T. Wright, Michael Licona, William Lane Craig, and Gary Habermas continuing to produce an incredible amount of evidence for the reality of the resurrection.  But Who Moved the Stone? is a nice, compact way to open the topic up to friends or family that would not otherwise read such weighty tomes. Lee Strobel credits this book as an important stepping stone in his journey to faith.  Give Morison a read, and I think you’ll find it more enjoyable and thought provoking than you may realize.
Lenny Esposito at 9:22 AM