Have you ever heard those "scare stories" of how believers will one day have most of their books banned by overreaching zealots? Normally, Christians think "well, I can see that coming down the line, when Christianity is outlawed in this country and Christians have to hide underground. Today, in countries like China, such things go on all the time, but in most Western nations we believe that we're decades away from such actions. Well, that time has arrived. 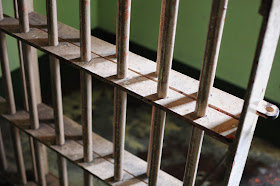 The New York Times recently reported that earlier this year the U.S. Federal Bureau of Prisons have banned most religious texts from all its chapel libraries. According to the Times, the chaplains were instructed to "the shelves of any books, tapes, CDs and videos that are not on a list of approved resources." The goal, according to BOP spokesperson Traci Billingsley is to deny access to materials that may "discriminate, disparage, advocate violence or radicalize."

Immediately, my reaction is one of amazement. Limiting access to thousands of titles of religious literature in case a title may incite terrorism or violence? I understand that the Department of Justice needs to be careful and control some of the materials that prisoners have access to. I mean, I understand books promoting governmental overthrow or how to build a bomb wouldn't be made readily available to convicted felons.

However, it seems to me that we shouldn't ban everything then create a list of approved books for access. Instead, ban the problematic titles. Prison Fellowship president Mark Earley summed it up when he said "It's swatting a fly with a sledgehammer. There's no need to get rid of literally hundreds of thousands of books that are fine simply because you have a problem with an isolated book or piece of literature that presents extremism."

As an apologist, I always encourage the examination of ideas. Truth has a way of holding up under scrutiny. Granted, sometimes you need a guide, but barring works that show the weaknesses within a belief system gives you a warped view of that system. Similarly, what about new titles? Why should prisoners have to wait to read the newest Lee Strobel book until some committee approves it?

Of course, the bigger issue is, if this type of screening exists today then what's down the road?