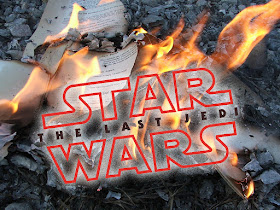 It should be no surprise that The Last Jedi, the latest installment in the Star Wars franchise, is by all measures an instant success. I went to see the film and was optimistic based on the initial buzz and reviews. And while I didn't walk away hating the movie, I didn't walk away for the theater inspired or excited as I had after the A New Hope or The Empire Strikes Back.

Then something funny happened. The more I thought about it, the more the film began to bother me. After a second viewing, I became more convinced that there are some serious worldview issues with The Last Jedi that sit at direct odds against the original trilogy. I want to go over three of them with you below. However, in order to do so, there will be spoilers so stop reading now if you haven't yet seen the film.


1. Faith and tradition are disposable

Most people know that George Lucas was a friend and fan of Joseph Campbell and his teaching on universal myth. Campbell knew that the traditions and teachings passed from one generation to the next shape humanity. Lucas picked up on this in his original saga; Luke Skywalker typifies Campbell's mythic hero.

Yet in The Last Jedi, the accumulated wisdom of experience over millennia doesn't matter. In fact, what's called for is a clean slate. Writer and director Rian Johnson shows this time and again with his “burn down the canon” script. The most telling scene in the film is that Luke, The Last Jedi Master, has been hiding away on the very planet that contains the original texts laying the foundation for the Jedi faith. He is shown as their guardian, but he is contemplating destroying them so the Jedi faith would be no more. He worries that the faith can be abused and therefore be an origin for evil as well as for good. Luke thinks that by ridding the world of the Jedi, he will likewise rid the world of the Sith.

Such a point could've been a rich vein for development. However, Johnson takes away the opportunity for thoughtful discussion and instead has the apparition of Yoda set fire to the texts himself, justifying it to Luke by asking “Have you read them? Page-turners they were not.”

I think the scene is indicative of the modern view towards religion in general and Christianity in particular. Christians are called “People of the Book” because of the central place Scripture holds in instruction and training in righteousness. The Bible tells us that human beings are born with a nature that gravitates toward evil. We learn that selflessness rather than our natural drive towards selfishness is the proper attitude to hold. But if it doesn't entertain us—if it isn't a page turner—then get rid of it. It's the modern attitude of “tl;dr yet I can comment on whether it's valuable or not.”

2. You don't really need to put in years of work to be competent

Much has been made about how quickly Rey became proficient with the Force. She can match any of Snoke's Praetorian Guard, theoretically the best of the best that Snoke could muster. Heck, on the island she is able to duel against Luke Skywalker and come to a draw. We saw Luke continue to try and fail to lift even one rock via the Force during his training, yet Rey is able to remove a landslide immediately without pause. Yet, given the timeline of the events in the film and how Rey had to get back to the action, she couldn't have been gone more than a few months at most. Her training seemed to last only days.

The concept of instant gratification is endemic in our culture. So many people today believe that happiness and comfort are the default position and any tragedy or hardship means someone else is holding you back. That isn't how the world works. The security you enjoyed growing up came at the expense of years of your parents' sacrifice and toil, working day by day for the eventual success they then enjoyed. There are no cheat-codes to life.

The most obvious message The Last Jedi sends is the one that Johnson clearly sought to send, that is that men offer nothing uniquely beneficial to society. The main protagonist, Rey, is female. So are all the leadership of the Resistance. Kylo Ren and Snoke are bad guys and are men. The double-dealing code-breaker is a man. The arms dealer is a man.

Even in the first few moments of the film I had a hard time believing that only women would be in the top levels of command. As the film progressed, its agenda became more overt and more satirical. It is the women in this film who time and again save the day while the men just mess everything up. Poe is a hotshot who recklessly expends a number of lives taking out a ship that makes no difference in the rest of the film. His later plans are shown to be useless as Laura Dern's Vice Admiral Holdo had a plan in the works all along. Even Finn, in his bravado charging the enemy, needs to be saved by Rose.

The egregiousness of this fiction is distressing. Men have long been the punching bags of media. War is an ugly thing, but it is and has always been men who time and again put their lives on the line to protect us from the evils that threaten our way of life. Men would willingly die to save women and children because they understood the weaker needed protection by the stronger. But now our society says the unique thing that makes men men is itself dangerous. It needs to be checked and men need to behave more like women. When you take away a man's self-understanding as provider and protector, you rob him of his place in the world. Why then would men in this or future generations stand up and put their lives on the line when a real enemy threatens?


Image courtesy LearningLark [CC BY 2.0], via Wikimedia Commons
Lenny Esposito at 11:53 AM