The Contradiction of the Tolerance Brigade

Imagine the sacrifice that's involved in becoming a vegetarian. Certainly, such a decision comes at some significant sacrifice. You would have to renounce your ham and sausage breakfast sandwiches and learn to enjoy different types of meals. And you'd have to be more selective when eating out as your choices will be more limited. You would have to clean out your kitchen of meat products or meat-derived sauces and flavorings. You would need to learn a whole new way of preparing food. 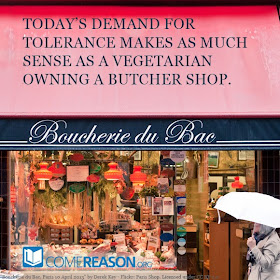 So, in order to be better prepared for the vegetarian lifestyle, you decide to enroll in a vegetarian culinary course at the local college. Here, they promise to help all vegetarians learn ways to prepare well-balanced and healthy meals that fit their chosen lifestyle. Yet, after you arrive, you notice that some chefs are teaching their students the different seasoning choices for trout, salmon, or halibut. Another is discussing how to make chicken tacos while a third is demonstrating the proper temperature to cook a steak!

You first complain to your fellow students, but you're told you're judgmental and intolerant. "But, this is supposed to be a vegetarian cooking course," you say. They answer, "We stand with teachers in rejecting culinary clauses that impede their freedom, including the right to choose what to use when preparing a meal." I would imagine that after all your personal sacrifice and hard work, this would not only be offensive to you, but you would walk into the office and demand your money back!


Sacrificing Morality in the Name of Morality

The same thing is happening right now in San Francisco. The Roman Catholic Archdiocese of San Francisco has set forth a set of rules for all instructors of primary and secondary Roman Catholic educational institutions in the San Francisco archdiocese that was adopted in the fall of 2015. It includes certain moral actions, such as teachers should affirm and believe in the churches teaching on chastity, and "only in marriage between man and woman that the intimacy of sexual union" is allowed while extra-marital relationships, including homosexual relationships are defined by the church as "gravely evil."1

None of this should be surprising, as these are well known beliefs of the Roman Catholic Church. Yet, people are protesting the statement, rallying under the hatshtag #teachacceptance. They have asked for volunteers, stating:


We believe that the students and employees at our schools deserve to go to work and attend classes free of fear and discrimination. In addition, the Archbishop has mandated that all faculty and staff be reclassified as "ministers," which will leave them without workplace protection.

Their Facebook group, Support SF Teachers, even organized a rally to protest these changes to the schools' handbook. They write "We stand with teachers and faculty working in the San Francisco Archdiocese in rejecting morality clauses that impede their freedom, including the right to choose who to love and marry and how to plan a family." Basically, they want it all; they want to be called Roman Catholic while opposing some of the most fundamental moral standards held throughout the church's history.

So, can you call someone who dines on T-bone steak every Saturday night a vegetarian? Just because I have oatmeal for breakfast each morning, it isn't enough for others to consider me a vegan. Why would groups like the Support SF Teachers demand the acceptance and tolerance of values antithetical to those that define the Roman Catholic Church? Because they just want to call themselves Catholic?

The rife contradiction in this isn't even lost on the left. Slate.com has never been a destination to find conservative thought, yet, Slate's William Saletan recently wrote an article about the ridiculousness of those demanding the church change its position.3 Saletan nails it when he states:


The protesters are confused. They reject morality clauses but call the archbishop's behavior sinful, shameful, and wrong. They belong to a church but seem to think it shouldn't forbid anything. They insist that no one can be judged, except for issuing judgments that contradict their own. They can't explain or even acknowledge the moral differences between homosexuality, contraception, and abortion. The nonsense of nonjudgmentalism has turned their brains to mush. It's clouding their ability to think and speak clearly about society's mistakes—and their own.

I agree. How is one to define the distinctives of any faith if none of those distinctives are allowed? Such an approach isn't tolerance, its ridiculousness. Vegetarians are vegetarians because they don't eat meat. If you want to teach how to cook a steak, don't apply at a vegetarian cooking school. Likewise, believers are believers because they follow the tenets of their faith. If you want to be morally promiscuous, don't apply at a school where they demand that you act morally responsible. Today's demand for tolerance makes as much sense as a vegetarian owning a butcher shop.