A Mostly Lethal Universe Does Not Disprove Design

One of the proofs of God has been how the universe has been incredibly finely-tuned for the existence of life. I've written on this in several different posts, and highlighted Robin Collins' argument that given the extremely improbability of a single universe coming into existence without a God, it is irrational to believe in a such an atheistic universe. 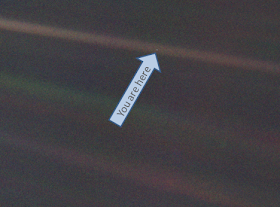 Most atheists have responded to this problem in one of two ways. The first is to claim that while the values of several dozen parameters are indeed uniquely positioned for life, this isn't a problem because there are an infinite number of universes that exist—all with different parameters—and we just happened to live in the one that will sustain life. I've already shown why this claim fails. But it's the second response that I've been hearing more often lately. Many atheists to day simply claim that our universe just isn't designed for life. Many Internet atheists have made such arguments, but I will use the one Richard Carrier presented in our debate as typical of them:

First off, objections like this miss the point of a universe designed for life. The claim of not only theologians but scientists such as John D. Barrow and Frank J. Tipler, Paul Davies, and Martin Rees2 is not that the majority of the universe is set up so that life could thrive, but that the parameters that govern all aspects of the universe are set precisely with life permitting values. Robin Collins breaks this down into three areas: The fine-tuning of the laws of nature, of the constants of nature, and of the initial conditions of the universe.3 Collins goes on to use the gravitational force as one example, explaining that if there were no force attracting bodies at long ranges, no stars would ever be able to form, there would be no heat for life, there would be no way for a planet to hold water or an atmosphere, and thus life would be absolutely impossible no matter where you are in the universe. It isn't the ratio of inhabitable verses uninhabitable space is great or small, the fine-tuning question centers on a binary answer: Can life exist anywhere at all ever? With just one or two minor changes to any of 20 or more constants or laws, the universe becomes unable to put forth any life at all.

While Atheists like Carrier are misunderstanding the argument, their responses may still provoke another question. After all, if the universe is designed for life, then wouldn't one expect God to create more than a minuscule area able to support life? However, this objection also draws the wrong conclusion. One cannot argue that simply because there are vast areas that are lethal for life that therefore the universe was not designed with life in mind. That doesn't follow. In my debate, I answered Carrier with this example:


Now Richard asks, “Why make the universe so lethal in so many parts? This obviously argues against God.” Well that doesn't follow at all. Picture a rancher in Texas—a man who lives alone and has 5,000 acres of land and a 100,000 head of cattle. Why would one man need so much land that's arid, desolate, and one where he can't survive in? How can you imagine that there is a 5,000 acre ranch only dedicated for one man? Well maybe it's there because that's what he desired. That serves his purposes. So just because the universe is vast, it is not an argument against God. People will move great mounds of earth to get to one diamond. You see, it's the value of the thing that matters and not how much space is taken around it.4

Thus, the conclusion is shown to be false from the premises. Simply because the majority of the universe is not life supporting doesn't mean that supporting any life wasn't the original purpose for the universe. It could be that God wanted to support life, but He also wanted to give us the beauty of the stars for our enjoyment. Of course scientists like Stephen Hawking have argued that the rate our universe expanded is actually just right for life, thus implicating that vast uninhabitable areas are part of what it takes to allow life to exist.5  Or God could have had another purpose for the expanse of space. But no matter. It's clear that the expanse of life-prohibiting space is not an argument against the universe's design. It only shows that we are rare and therefore highly valuable.