Scientists Clinging to Blind Faith for All to See 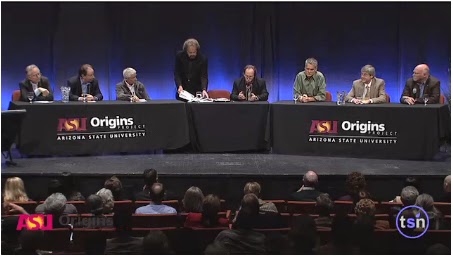 I've had several recent discussions with folks who hold that science is superior to religion because science is all based on experimental evidence and facts while religious people just cling to "blind faith." Richard Dawkins recently reiterated this view in a debate held in Mexico City when he made the statement:


[Those who believe in God] like to point to the origin of the universe and say ‘Well, science can’t explain the Big Bang or scientists can’t explain where the laws of physics come from.’ Physicists are working on that. That’s what scientists do. They don’t lie down and pathetically say ‘Oh, we don’t understand it so God did it."

Somehow, those who hold to this view seem to forget that scientists are people, and as such they are subject to the same faults and biases as the rest of humanity.  Nowhere is this illustrated more clearly than in a recent panel discussion of leading scientists on defining life (see video below).  Held at Arizona State University and hosted by The Science Network, this panel was comprised of luminaries such as Dawkins, world-renowned genome expert J. Craig Venter, Nobel laureates Sidney Altman and Leland Hartwell, NASA planetary scientist Chris McKay, and physicists Paul Davies and Lawrence Krauss.  A stellar group to be sure.

The discussion starts by moderator Roger Bingham asking if it is necessary for us to agree on a proper definition of life before we go looking for it in space, so that we can know what we're looking for. McKay almost flippantly dismisses the idea and says we should just start looking! Imagine using that same criteria in medicine — we don't need criteria as to whether a person is still alive, we'll just make it up as we go! This is why excluding philosophers from these discussions is so detrimental.

But the more interesting parts happen starting around the 9:00 mark of the video. As Evolution News pointed out, Dawkins and others have claimed that all life uses the same DNA vocabulary for living creatures. In the video, Venter disagrees with this statement and says that science is showing the concept of all life stemming from one standard DNA vocabulary is not accurate. "The tree of life is an artifact of some early scientific studies that aren't really holding up...So there is not a tree of life." (See the article linked above for the specifics on this claim.) Dawkins is aghast at the suggestion and Paul Davies tries to understand how this could be, but Venter sits calmly and confidently by his statement. This is a pretty earth-shattering admission by Venter, but it's not my main point.


Dismissing Scientific Evidence in the Name of Science

The very next question to the panel is if science were to discover the origins of life and the origin of consciousness, would that sway religious believers or would they continue to cling to their concepts? Dawkins and Krauss both respond that it wouldn't matter; religious people are going to believe what they've been "indoctrinated in childhood" to believe. Dawkins even says that "Well, it obviously ought to have the effect that the questioner says, but I don't think it will." Immediately after that exchange, Chris McKay at the 14:50 mark states that he doesn't believe Venter's view that the tree of life is obsolete, but he still holds to Dawkins' 1980's claim that all life uses the same genetic vocabulary.

I want you to catch that. McKay, whose specialty is geophysics and not genetics, is dismissing the findings of one of the pre-eminent geneticists in the world because he doesn't like where it would take him. The scientist is ignoring the findings of science because the findings threaten his views on the origins of life. McKay is guilty of exactly what Dawkins and Krauss were poo-pooing religious believers about!  As the Evolutionary News article points out, we know that Mycoplasma DNA uses the UGA codon not as a stop as in human genes, but to code for the amino acid tryptophan.  That's like the difference between the saying "Mama die!" in English and saying "Mama die!" in Dutch, which means "Mom, I want this one!" It's a different vocabulary, a different message.

So, the next time you hear that scientists are bias-free and  objective while religion leads to only blind faith, don't you believe it.  The evidence is available for all to see.